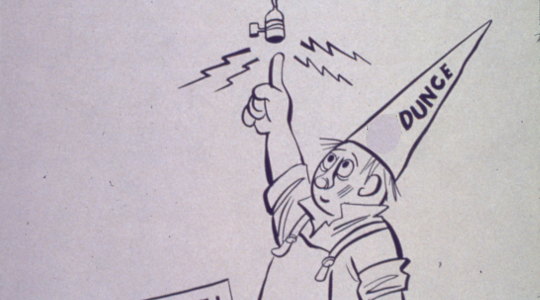 Now that my kids have completed autumn parent-teacher conferences, I can’t help but marvel at how much of their lives are measured, tested, evaluated, and commented-upon. How would I hold up under that level of scrutiny in the School of Life?

Home Economics: C-
While Scott can cook, he falters when recipes have more than two steps. Lacks creativity. Children sometimes rely on him for sustenance. Not sure this is a good idea.

Public Speaking: C+
When Scott speaks, people have a difficult time following his fragmented logic. Pulled out a C+ because he is learning to speak less often. Forgets punch lines to rudimentary jokes. Also: tells jokes.

Mathematics: F
Tries hard. Hurt himself last week trying to perform a simple subtraction problem in his head. Was sent to nurse’s office.

Geography and Map Reading: F-
Got lost on the way to the nurse’s office. Was recently seen examining the blank side of a map for directions. So dependent on his phone for guidance, the phone requested a transfer.

Language Arts: D+
Normally a self-graded course, we made an exception for Mr. Martin. His self-assessment was just that delusional.

Physical Education: C
Shows up. Can’t run for more than 53 seconds without collapsing. Is prone to crying.

Music: Incomplete
Scott’s family sabotaged the water heater to keep him from singing in the shower.

Health: D+
His failure to understand basic concepts is impeding his growth.

OFFICE NOTE: The grades and comments for Health and Special Topics – Humor were accidentally switched. Please bear that in mind when reading Mr. Martin’s report card.