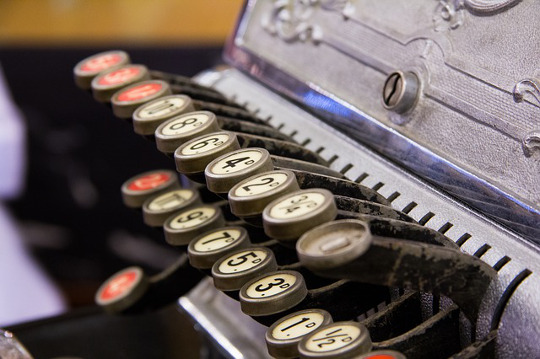 I was a cashier at a local grocery store during my three-year stint at a two-year community college. When I think back on my many jobs, few of my occupations taught as much as my time cashiering for folks in the suburbs. Really. Here are some of the many life lessons I learned during that surprisingly educational time.

Every fruit and vegetable has a code. Ask your cashier. Bananas are code #20, for example. Given enough time, you start to memorize the codes for even the most exotic fruits and vegetables. Kumquats. Kale. Plantains.

But given just a little more time, the numbers start to replace the identities of the produce. I started to look forward to a #20 sliced on my cereal. I knew exactly how many #4553 it took to make enough guacamole for a large family. Everyone was happy when #3211 was finally in season. Eating a #9200 made the roof of my mouth itchy.

In short, being a cashier had the paradoxical effect of putting me in daily touch with the great human food supply and making me feel like a robot.

Your cashier is probably stoned

I don’t smoke pot. Never have. What can I say? When I told my parents I was going to a party to enjoy Doritos and Dr. Pepper, that’s actually what I did.

But as a cashier, I discovered that the chickens in the deli weren’t the only roasted things in the store. Somehow my fellow cashiers decided I wasn’t a narc and let me in on their little secret.  I was stunned, not only by the widespread nature of the use, but of the high-functioning ability of these stoned individuals to provide incredible customer service.

And why not? Each stoned cashier had access to every kind of snack they could want. A stream of bizarre characters flowed through their lines to stoke their amusement. The only danger was the occasional Visine shortage, or an uncontrollable case of the giggles whenever a #3299 rolled down the belt (which, to be fair, really did resemble part of the male anatomy).

It is never too late to learn math

With the exception of geometry, I never got higher than a C in any math class. The only reason I squeaked a B- in geometry is that I thought that geometry wasn’t actually math. That said, I would argue that the very best place for an arithmetic flunkie to learn real-life math in a hurry is in the cashier line of a grocery store.

“But Scott,” I hear you saying, “how can anyone learn math with the automatic scanning systems and change-making cash registers?”

Because the elderly, that’s why.

The elderly care nothing for your automatic machines. If they want to buy half of a carton of eggs, which they have somehow found the bodily strength to tear in two, they aren’t going to bother listening to a young man saying “I don’t know how to ring that up.” They have plenty of time to argue with you, they can’t eat twelve eggs, and they also are too old to care what you think. They are not going to let a child tell them that they can’t buy six eggs from a twelve-egg carton.

So, what’s one half of $1.79? You don’t have a calculator. There are four loaded grocery carts in your line, all accompanied by people who are watching you. You have one moment before the lady at the end of the line starts heaving audible sighs. You nearly failed Algebra. Good luck.

You know what? In general, people at the grocery store were pretty nice. Regardless of their mood, or their state of stress, or if they haven’t slept or eaten in nearly a day and their four year-old is screaming in their ear, there were very few people in the world who won’t soften when someone tries to help them.

Don’t get me wrong; my cashier line was a nearly unending stream of suburban drones, and their standard mood was unappreciative to say the least. There often seemed to be scarcely a teaspoon of personality sprinkled among the whole lot. During a long shift (and without the benefit of recreational drugs), I had to find something to do. So I started being theatrically nice to them, as kind of a subversive test to see if I could piss them off with kindness. It was a jerk move, but hey, I was 19 and bored.

Then a funny thing started to happen. People were nice back. I became one of those cashiers with regular customers. They would tell me that they looked for me during their last visit, and were disappointed that I wasn’t there. It may sound silly, but the effect was profound. When was the last time anyone told you that you were missed?

So mommas, let your babies grow up to be cashiers. Not only will they learn valuable life lessons, but they’ll pick up a few #2912 for you after their shift if you remind them.