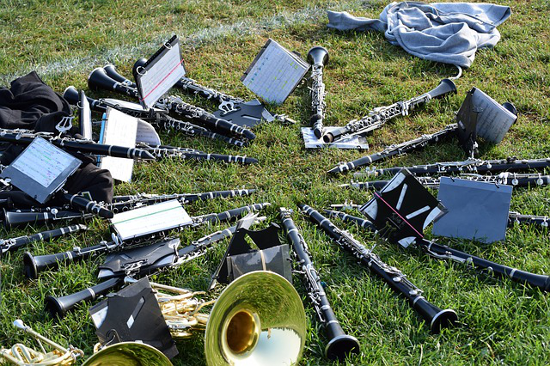 An odd feeling settled over me while attending my eighth-grade daughter’s band concert. I had just sat through the seventh-grade performance, which was… unique. Brave. Exploratory? I’m at a loss to describe the quality of the show, but it was truly something only a parent or a grandparent could enjoy. Having no participants from my gene pool in the earlier performance, I was transported back through years of attending band concerts and recitals, and noticed a pattern.

These shows are simultaneously wonderful and terrible. And of course, they should be. During the first fifth-grade concert where the band works up to a grand finale of “Hot-Crossed Buns,” these poor children have had a maximum of five months playing their instruments. It is unreasonable to assume that their performance will more than occasionally resemble music are we adults know it.

The only thing more fun to watch than those fifth-graders creasing their brow over the simplest of melodies is their genuine surprise at the applause. From there, a great many of them are hooked. They are prepared to take their entire families through a veritable purgatory of song.

Oh, Muses! What have we done to thine aire?

I have attended band concerts since that first fifth-grade show with a potent mixture of resignation and daydreams. You can see it in the parents and grandparents at any one of these events; the reason that so many of them are taking video of the event is not out of a sense of duty, but to give themselves something to do. If an adult is not mentally engaged during the low points of these musical events, there’s no telling what brain damage the sound could cause.

And what a sound! Drums clatter in rhythms counter to each other and any control the conductor hopes to achieve. The flutes are a half-measure behind. One valiant trumpet player is carrying the rest of her huffing cohorts, and the French Horn corps has tacitly agreed to only appear to be playing along. The result is a patchwork of cacophony, a stuttering stop-start of missed cues and squeaking woodwinds.

Elementary band directors should each get a Nobel Peace Prize on a weekly basis.

Still, with a parent’s pride and a martyr’s sense of duty, I have attended each of these concerts without fail. And this week, something unprecedented began to happen.

The eighth-grade band launched into Mussorgsky’s Night on Bald Mountain after a student introduced the piece by calling it “That other famous song from Fantasia.” As I settled in for a protracted mental vacation to the Bahamas, my ears were assaulted with… a completely recognizable fanfare leading into the introduction of the dramatic piece. Tympanies rumbled! Low bass horns blared in support of the trumpets’ climbing flights! Woodwinds didn’t squeak!

As the band leaned forward into the faster movements, a snare player kept the band in lock-step with capable, chugging rhythm. Flutes trilled and threatened, and the bass drum rumbled like a mountain full of angry dwarves. I thought to myself, What is happening in this concert space? It’s getting downright Russian up in here!

Whether it was the cumulative efforts of all of the patient band directors before them, or simply a good few rehearsals… I was blown away. It was the first time I would have enjoyed a school band concert whether or not my child was involved. My heart swelled with pride.

What have we learned?

There will be dark times, band parents. There will be moments when the bellowing practice from the bedroom or the early drop-off into a maelstrom of tuning instruments will make you wonder: should I level with this kid? Should I tell him that I’m done listening to Stars and Stripes Forever being inexplicably morphed into some kind of avant-garde jazz death march?

The answer is no. Because someday, years from now, your child may help to create a sound so glorious that you might weep a little. It will be good, and not in an ironic or “incrementally better than last time” kind of way. It will be music. And your patience will have been a part of its creation.