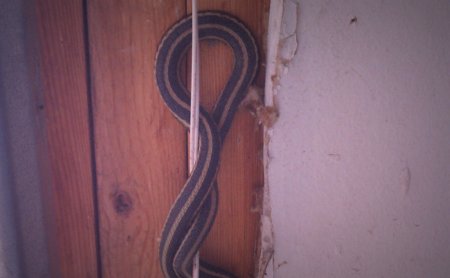 Some people like to go out and experience nature. What a waste of time! Why not bring nature to you, where you live? Maybe even in your house with you?

My wife and I sought a house in early 2004. There was still snow on the ground, so we knew we would choose a home without having seen the landscaping. After years of condominium and apartment living, however, we felt up to whatever challenge the yard might hold.

Mind you, we thought the challenge would be patchy and uneven turf, or a long-untreated dandelion infestation, or, at worst, homely garden gnomes. Our imaginations, in retrospect, were laughably small.

We found a house, signed our lives away, and moved in a chilly May. By the middle of the month, the receding snow revealed a completely serviceable lawn. The house’s hidden surprise, however, soon emerged onto our sidewalks, driveway, and grass.

Snakes. Garter snakes. Dozens, possibly hundreds of them, writhing in piles and knots.

When my family first saw the mass of emergent reptiles, much girlish shrieking ensued. Then, after my wife calmed me down, we assessed the problem. The problem seemed to be that there were dozens of snakes leaving our foundation after a long winter’s nap. More shrieking.

The snakes were not mentioned in the realtor’s brochure. Three bathrooms? Yes, with pictures. A living mass of slithering, cold-blooded creatures bearing enough forked tongues to put Indiana Jones into an anxiety coma? No, it didn’t come up.

We called a professional, and somehow chose the only exterminator in the book with a conscience. “I could poison them,” he said, “but they’ll just go back into your foundation and die. The smell in your basement will be unbearable. Instead, seal the foundation cracks after they leave and before they come back in the fall.” He departed, unpaid.

Sure enough, as the spring wore on, the snakes tired of us and went away for the summer. Where did they go? We didn’t know. They neither called nor wrote. But their departure gave us time to patch as many cracks as we could find.

The snakes and my family have kept an uneasy truce since then. The snakes still return, and they still find cracks, which we find and fill as we can. They return in the spring, but not in the clotting numbers they used to. Just enough for the neighborhood kids to pick up, scream about, and collect in buckets.

And they say kids don’t get out and experience nature anymore. Why should they? At our house, nature comes out to greet them every year.

1 thought on “Home is Where the Slithering Is”