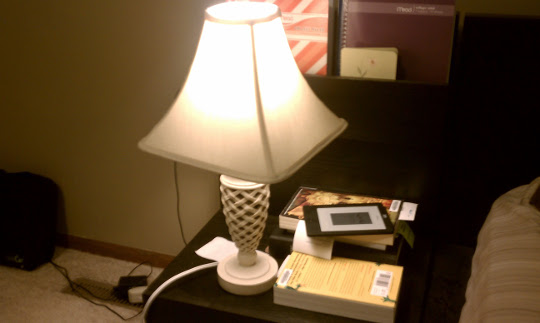 Last night, as my book became unreadable through drooping eyelids, I reached over to turn off my bedside lamp. As I twisted the lamp switch, it failed to issue the usual pair of clicks and expected plunge into darkness. Instead it spun in place, and the lamp remained very much lit.

“What the hell?” I exclaimed. I kept twisting the switch and it kept spinning in place, like a stripped screw that will never gain traction regardless of how much torque is given the screwdriver. Twist, twist, twist. Spin, spin, spin. No click, no click, no click. Light, light, light.

So I did what any red-blooded, small-brained male would do in my situation. I picked up the lamp and really laid into it, pushing the switch down and twisting with renewed fervor. The bulb remained defiantly lit.

“My lamp switch is broken!” I exclaimed to my wife, who was trying to watch the Midsomer Murders TV show in bed next to me.

“It’s pretty old,” she said, without a note of surprise. I think she was referring to my lamp.

“But it won’t work! It won’t turn off!” I said, assuming she hadn’t fully grasped the strangeness of the situation.

“Uh huh,” she said, probably considering a late-summer murder of her own.

Why am I surprised?

Under normal circumstances, I am completely—perhaps fatalistically—accustomed to failing technology. Cars? I expect ridiculously expensive brake repairs and the occasional tire patch. Computers? It’s only a matter of time before my screen goes blank for reasons I’m not meant to understand. Washers, dryers, ovens, and furnaces? Ticking timebombs of eventually dormant proportions.

But a bedside lamp?

“Seriously?” I said aloud, still holding the recalcitrant lamp. My wife offered no reply this time. This meant I was really pushing it, and needed to move on.

And so I did.I deactivated the lamp by unplugging it, like some kind of Neanderthal, and lay my huge, frustrated unibrow on the pillow.

My lamp broke, so we’re probably all doomed

If I can’t keep a bedside lamp working, if the simplest switch known to man can’t keep it together, what hope is there? It has shaken my remaining faith in technology to the core. Do you know how many switches there are in the average nuclear power plant? Well, neither do I, but there have to be a lot, right? Each one counted upon to accomplish a task, be it simple or grand. Each one as prone to failure as my trusty bedside lamp.

Though I feel better with the natural light of morning streaming through my window (which, thankfully, requires no sketchy technology to work), I can’t shake the feeling that the path to ruin is not in clashing political parties, global climate catastrophe, or irreconcilable differences between religious sects, but in some 18 cent switch somewhere. It will spin in place someday when a technician needs it to work, and a massive series of industrial accidents or a worldwide pestilence or a breakdown of the electrical grid will occur. We’ll be knocked back into the dark ages just as sure as my bedside lamp won’t turn off.

Or, maybe not. At any rate, try to have a nice day.