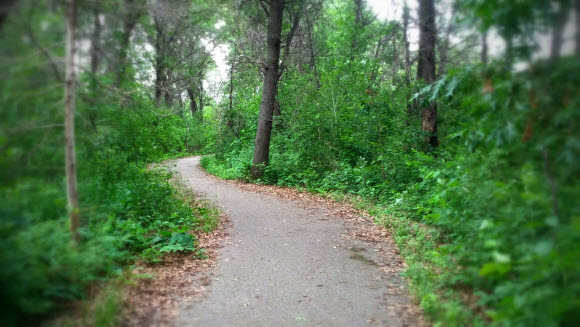 Many are the tales of unprepared explorers and pioneers who, having underestimated nature, fall victim to the dangers of the natural world. In spite of the fact that I live in a human-dominated landscape where raw nature has been pushed to the boundaries, I refuse to believe that the threats of nature are so easily overcome.

I have been embarking on a daily walk through a conservation area near my work in Shakopee, Minnesota. It’s breathtaking; experts have restored the marshy woods with native grasses and clearly-marked walking trails to limit human interference. After several incidents, however, I cannot help but think that this may be the foothold of a larger, more insidious plan on Mother Nature’s part. I present my evidence below, culled from hours of walking and avoiding work… I mean, recharging my creative batteries.

Squirrels are cute, especially in ones or twos. In one of my walks, however, a turned a bend in a wooded area to see a confabulation of five squirrels on the walking path. At first, seeing a group of squirrels is a multiplicative of cute. I’m pretty sure I said “Ohhh!” or some other word to express my surprise and delight at beholding that much cuteness in one place.

I tried to keep my cool as I passed between the trees which were teeming with squirrels, and suddenly felt very vulnerable. What if I had interrupted not a casual squirrel conversation, but the first meeting of the advance squirrel guard? No one has ever heard of a squirrel attack, but what if this was the opening salvo in a larger squirrel plot to take back the natural world?

I passed through the furry, tufted gauntlet unscathed… but what about next time?

In which the skies are darkened by the red-winged menace

With crimson-orange epaulets of an unmistakably martial stripe, the red-winged blackbird is by far the most common bird found on my marshy walks. They are also the most angry; while the occasional killdeer pipes its alarm if I walk too close to its nest, the red-winged blackbird is clearly annoyed that I’m upright and breathing anywhere on the planet.

When I approach a pond, I can see the red-winged guards swaying on the long grasses. They begin chirping back and forth, a sound with more than a passing resemblance to a sonar ping (and probably something of its military application). As a get closer, the first scout attacks. Squawking and chirruping above my head, the bird is in no real position to do much but poo on my head. Still, as scout after scout harasses me in succession, it’s their fearless and relentless nature that has me so unnerved.

After the last guard releases me from suspicion, I can’t help but think the red-winged blackbirds may be growing in coordination, tracking my movements and sounding alarms with increasing facility. God help us if they learn to speak squirrel.

In which the creeping, verdant horror rises to kill me from below

It’s an actuarial fact: the older I get, the more likely it is that I will die from falling. Gravity is slowly becoming my greatest enemy. Nature knows this, and has set a trap directly in my path to take advantage of my 40-plus year-old frailty.

I was walking along the path one day, admiring a stand of oaks (which have not yet made any threatening overtures), when I tripped. It wasn’t any simple irregularity in the path, or even my own clumsy feet. Something was reaching up from the ground and trying to kill me. Don’t believe me? I took a picture.

The tufts of grass pushing forth from the ground represent more than the simple resilience of nature in the face of a pavement-happy human race. They represent a personal effort by a ruthless entity to get me to break my own face.

They increase in number along the paths each week, these little bubbles of resistance. How long before one takes me down to a place from which I cannot recover?

Be vigilant, and remember me

My daily walks continue, now more fact-finding missions than fun walks for exercise and natural appreciation. If I disappear during one one my routes I charge you, dear reader, with spreading my warning so that my sacrifice may not be in vain.

Nature is planning its next move, and the next move may seem innocuously cute or cuddly… until you are horribly outnumbered and it is too late. Good luck.

And seriously, watch those squirrels. Up to something, I tell you.