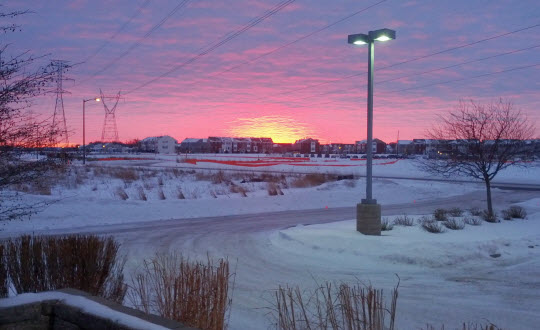 During one of my recent walks in the woods near my workplace, I was overcome by a stifling wave of humid, windless heat. The leaves around me crowded in, and the normally boisterous wildlife grew still. I half expected a band of jungle explorers, heads adorned in pith helmets, to tumble out of the thicket and onto my path. The sultry Minnesota summer had arrived.

Here are a few of my conclusions while recalling the winter of the polar vortex, when the plains of Minnesota had more in common with Ice Station Zebra than the gentle, sultry, verdant landscape we can now behold.

The polar vortex of 2014 in review

The winter of 2013 and 2014 was so rotten, so bloody cold, that there is a Wikipedia article called the 2013-14 North American Cold Wave. The “polar vortex” problem that the media latched on to was, in actuality, a result of the weakening of the large cyclones of air that circle each of our poles. Polar vortices didn’t attack us; they actually failed to protect us. The jet stream was allowed to leak further southward, bringing icy air with it.

Nice job, polar vortex. You had one job. ONE.

Having gone to school most of my life in Minnesota, I can tell you that there’s nothing like a ‘snow day,’ when so much snow has fallen that the superintendent cancels school. I recall spending the entire day outside in those circumstances. If there was a screaming blizzard, that only made the desire to build snow forts more intense.

Such days are rare, however. We’ve enjoyed one snow day every two or three years.

During the 2013 and 2014 school year, however, school was closed due to cold weather five times. FIVE TIMES. Sounds like amazing fun, right? Wrong. My hardy, adventurous children couldn’t bear the cold for more than a few minutes, and indeed, it was unsafe for them to do so. Therefore, they were hardy and adventurous children inside the house. Three children between ages 8 and 12 teetering between lackadaisical boredom and sheer destructive, pent-up rage.

My wife and I have only recently started speaking of those days, so yes, the healing has begun.

It’s not as funny when it happens to you

In Minnesota, we have the privilege of laughing at other states shut down by weather events we would consider par for the average winter. We pride ourselves on being prepared for virtually any weather event, keeping our public infrastructure open and humming through snow, cold, or ice.

Indeed, during the days when the weak polar vortex was wreaking havoc, that schadenfreude kicked in whenever a Southern city was paralyzed by a quarter-inch of ice. But that was cold comfort indeed when our state repeatedly showed up during the morning news programs as harboring the coldest temperatures in the country. I could only imagine our northern neighbors watching “Good Morning, Edmonton” and laughing at the weakling Minnesotans who can’t handle a -30° morning.

I’m personally holding you to your promise, Minnesotans

Now, as the summer heat sets in and the forest paths become ever more rainforest-esque, a memory strikes me. After weeks of being shut into our houses, workplaces, walkways, and malls this winter, many of my friends and co-workers exclaimed “I will never complain about the heat again!”

Not so true. In fact, they are whining in droves. Returning to my workplace after one of my recent walks, I heard one of my co-workers say, “ugh, it’s a little warm to be walking, isn’t it?”

Yes, yes it is. My armpit stains reach my waist, I have seeped two gallons of water from my forehead, and the bottom tread of my walking sneakers has melted flat. But I made a promise like many of you did, and December will be here in a few short months. How do you want to remember your brief liberation from icehood?

3 thoughts on “You Had One Job, Polar Vortex”