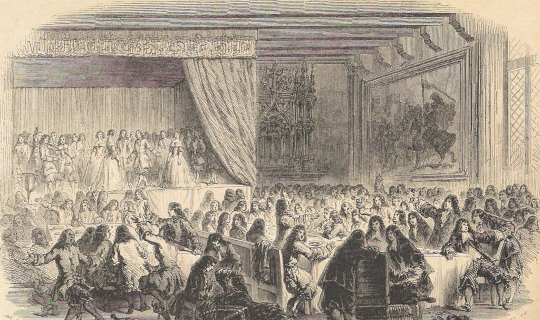 I met an interesting man at a conference that my company recently hosted. His name is Juan Carlos, and he is a banquets manager at the hotel in which our conference was held. I liked him immediately for his willingness to get in front of us and determine what we needed. He was supernaturally good at his job, far better than I have been at any of mine. His management turned results as well; we were better cared for in the banquets hall than we ever have been at any hotel. Whatever needs weren’t anticipated by his staff were quickly discovered and then met. Once we crossed into Juan Carlos’s domain, we were treated like royalty.

If you have never worked in hospitality or thrown a conference, you may underestimate how difficult this really is. Putting on a big show for people is like building a beautiful stage from duct tape, chicken wire, and papier mache. Beyond the tranquil backdrop is a chaotic behind-the-scenes shuffling of resources, shortages, and personalities. It’s a challenge.

Unlike me, however, Juan Carlos wasn’t breaking a sweat. How?

The world according to Juan Carlos

I asked Juan Carlos what his secret was, as I felt that he and I were waging similar battles (his in the banquet hall and mine in the conference at large), and it was clear to me who was doing the better job. He told me two things that make his work successful.

I chuckled collegially. We married men like to joke about our place in the world. Juan Carlos gave me a polite-yet-firm look that said, “I am not kidding about this at all.” I sobered up.

“Second, there is always room for improvement.”

Of course, this is a cliche of the business world. But in this immaculate environment under Juan Carlos’s control, “There is always room for improvement” took on an entirely different meaning.

Because… I mean, where? Where was the room for improvement? I looked around in the entrance area to the banquet hall. His staff was swiping empty glasses off of tables as soon as they were set down. Another phantom figure whooshed by, and the barely-formed moisture circle was wiped away. Inside the hall, a full plated meal was being swiftly delivered as attendees sat down, with a dessert service waiting in the wings. I was in the thrall of a circus of service perfection, and here was the headmaster saying that he could do better.

As the controlled chaos of the conference gave way to the low buzz of reflection, my short visit with Juan Carlos looms large in my imagination. I have regarded “There is always room for improvement” both as a motivational tool and as a gesture of false modesty. It’s something coaches say to their underperforming players who think they’re doing better than they are. It’s also a tool for people who know they’ve reached perfection say to challenge their customers to find a shortcoming. There is room for improvement. We dare you to find it.

But in the presence of Juan Carlos, the statement was no small boast. There was no doubt in my mind that this motivated man was finding ways to hone his craft, motivate his staff, and make his banquet hall the best in the world. And once it is the best in the world, he will only continue to work harder.

I found it very inspiring. In the midst of the conference and all of its attendant exhilaration, extroversion, and exhaustion, I relied on Juan Carlos to lock down his segment of the world. He did that, and much, much more. I was free to do my job, and I took the challenge seriously. Very seriously. We can all do better. It’s an act of listening, an act of creativity, and an act of caring.

And when I got home, I listened very carefully to my wife.

2 thoughts on “Room for Improvement”