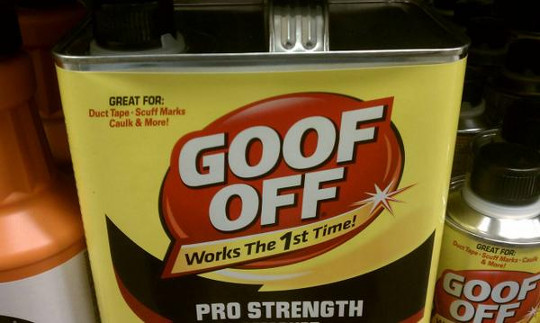 As I was looking for carpet-to-flat flooring transitions at Lowe’s the other day, something about my surroundings caught me funny. Among all of the big box home improvement stores, Lowe’s strikes me as the most suburban by far. It’s such a clean, respectable looking place. I had been asked twice if I needed help finding anything after only a minute in the store. I could go a week in Menard’s or Home Depot without being asked if I need help.

Here was a place for me! I am an avowed home improvement idiot. I need my instructions clearly labeled. I need my paint pre-mixed. Anything more complicated than an outlet cover replacement requires the assistance of a contractor. My family is full of do-it-yourselfers and amateur craftsmen of decent skill. I, on the other hand, must have been left on the doorstep.

As I strolled the Lowe’s aisles, I was juxtaposing my mental praise of the safe, professional environment with a brash, all-caps, YouTube commenter voice. I retrieved my phone and tried it out on Twitter.

I’m at Lowe’s, looking at some carpet-to-tile transition pieces AWWW YEAH THIS IS HAPPENING

It pleased me. As I looked for my transition pieces, I found their selection of molding designed to match the flooring options. So be it.

There’s a fine selection of coordinating moldings at reasonable prices, as well ALL UP IN THIS BIZNESS #loweslife — Scott Martin (@scott_c_martin) August 27, 2014

And then, a mellow song sounded from the speakers above. What is this I hear? What’s that band name again? Ah, yes.

All in good fun, making fun of album-oriented alternative at the same time. I found what I needed and was out the door shortly thereafter… not before, however, passing some mystery gunk-removal solution with the best brand name ever.

If it doesn’t work the first time, you’re goofing off wrong. pic.twitter.com/b3Z4wTaUTl

I returned to my office a few minutes later, satisfied with my trip and pleased with my stupid little jokes on social media. My smugness dissipated, however, when I opened my browser to find that the Lowe’s social media person was unusually attentive.

Dammit. Nothing kills a comedy buzz like genuine helpfulness (which, given my experience at the store, was in lock-step with the whole “Lowe’s is a helpful kind of place” vibe they had going). Having already established myself as an idiot, I tried to return the favor in kind.

.@Lowes I will! Your Shakopee, MN store was clean, the employees attentive, I found what I was looking for AND YR MKTG DEPT IS ON POINT

Which was followed by more kindness and helpfulness.

@scott_c_martin You’re making our day! We’re glad you had such a wonderful experience in your local store. Thanks for the call out!

I left it there.

I think we’ve all learned something today… or not

What has this world come to? You can’t even make fun of a big-box home improvement store without being gently zinged by their social media representative on duty.

I thought there might be something more to say about society, the state of satire, and the age of social media… but you know what? I was caught out being an idiot, and was handed my pants without this company ever breaking stride from their mission of helpfulness. Touché, Lowe’s. Touché.