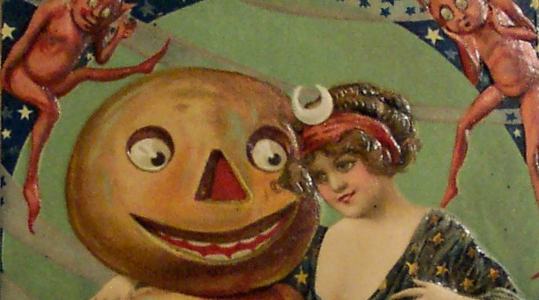 If phantoms, ghouls, and monsters want to cross into the living world and wreak havoc, what better opportunity than your workplace Halloween party? Here are some tips to tell the difference between normal and paranormal behavior as you try to survive your day at work.

If zombie Richard Nixon crashes your party, remember that NO ONE is creative enough to combine a zombie outfit and a costume of our 37th president. It is probably actually zombie Richard Nixon, and you should brain him with a paper shredder at the earliest convenience.

Bonus points: Draw him away from terrified co-workers and into a trap by saying “Here, Checkers! Come here, boy!”

If you find yourself agreeing with everything the vampire says and they aren’t even in management, break off the conversation if you are still able. Under no circumstances should you arrange a meeting after sundown.

Bonus points: Discuss the next company blood drive with them to see if they faint from excitement.

If you see any hulking, drooling monsters in the vicinity, and you aren’t sure if they’re real, pay attention to how they treat the carpet. If they are dripping spittle, slime, or a former co-worker’s blood, they are an actual monster. Run.

There are elaborate decorations, and then there’s going too far. If one of your co-workers appears to be paralyzed by venom and is wrapped in a large silk encasement, take an early lunch and stay away until maintenance can rid the area of pests.

Bonus points: Raid Betsy’s desk for candy while she is incapacitated.

If someone takes your chair at work and won’t move, it’s probably a ghost. The living are not usually that rude. Ghosts, on the other hand, will wake you up at night, rearrange your stuff, rattle chains, and sit in your chair when you’ve got stuff to do. Go find someplace else to work for the day.

Good luck, and stay safe! Your next performance review will go poorly if your desiccated body is stuck in a spider web somewhere.

3 thoughts on “How to Survive your Halloween Work Party”